Today, South Fulton is considered a twin city with Fulton, Kentucky. If you have ever visited the Twin Cities, you will notice that it is, in fact, difficult to distinguish one town from the other. The two towns are “split down the middle” with the Ken-Tenn state line.

According to historians, errors made by surveyors drawing the “Walker Line” kept Tennessee and Kentucky at odds for many years. The final agreement between the two states in 1820 caused the state line to shift south, thus forming the Twin Cities. To learn more about the Walker Line, click here. (Adapted from TNGenWeb.org)

In 1859, the South Fulton area was named as Jacksonville, due to the fact that land in the area once belonged to the seventh President of the United States, Andrew Jackson. It was recorded in 1823 that Jackson sold approximately 1,000 acres of land in northeast Weakley County. It wasn’t until 1867 that Jacksonville was added to Obion County as District 16. The Jacksonville Masonic Lodge No. 50 and the Jacksonville Free Will Baptist Church, built in 1880, still carry the old town name. The area remained “Jacksonville” until 1895 when South Fulton was first chartered. The city of South Fulton has also been referred to as Pontotoc, Fulton Station, and Fulton.

Growth of a City

The 100th anniversary reprint of the Fulton Daily Leader newspaper (originally printed April 8, 1911) states that the Twin Cities grew in size and population thanks to the railroad systems, timber industry, poultry industry, and farming of tobacco, wheat, and corn. Citizens of this area proclaimed that churches served as guardians of community morals, and that the “high moral standing of our city is due to the fact that it has been permeated by Christian influence and education, such as have radiated from the various church organizations established here.”

In the early 1900s, South Fulton was home to the South Fulton College. It was led by principal and president Professor W. Claude Hall, who also taught mathematics, grammar, and penmanship. The college was described as one of the leading educational institutions in the area with students from abroad. The paper stated that people began to realize “it is better to send their children to institutions like this where they get personal instruction, rather than the big institutions in cities were much of the work is machine-like and perfunctory.” Other leaders within the institution included Miss Maggie Nix over the principal primary department, Professor S. Homer Tatum who taught literature, geology, and history, and Professor H. M. Phillips who taught algebra, geography, and grammar. At this time, South Fulton College had approximately 500 students enrolled at their institution. 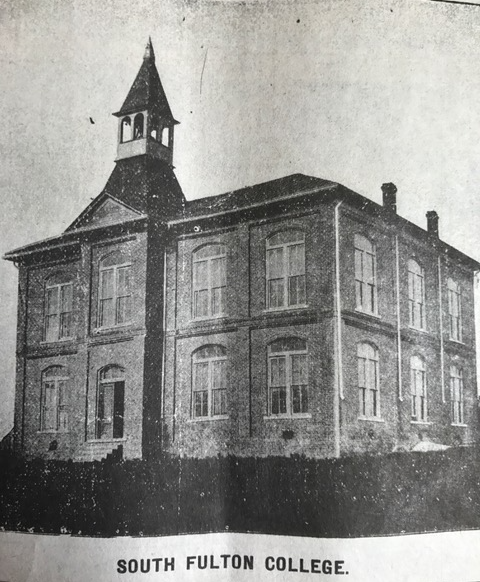 CITIZENS OF THE PAST

J. P. Swann was another citizen of merit who served as the town mayor. Mister J. T. Futrell was a popular marrying Esquire who united over one thousand couples in matrimony at that time. Couples from hundreds of miles around came to him to tie the wedding knot; they came by train, buggies, autos, wagons, horseback, and even on foot all seasons of the year. He was a Notary Public and Justice of the Peace, as well.